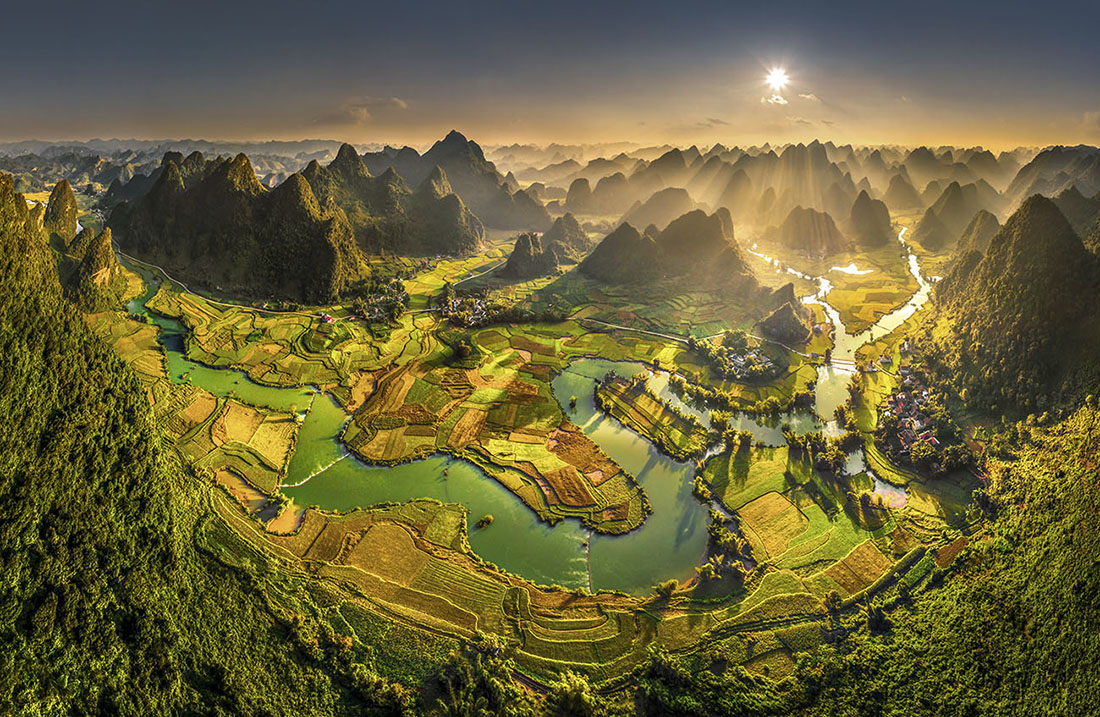 Quay Son River is surrounded by golden rice fields and karrst limestone mountains in Cao Bang Province. Photo by Tran Bao Hoa
The cool climate of Cao Bang Province that borders China ensures that you can come here all year round. The best time to visit Cao Bang is during the dry season from October to May with little rain.
If you want to see white frost and ice covering mountainous areas in Phia Oac, the second highest peak in Cao Bang, you better come there from November to January as the temperature could drop to below zero degree Celsius.
WHERE TO STAY
For budget-friendly travelers, Yen Nhi Homestay, Khuoi Ky Homestay and Lan’s Homestay Ban Gioc offer prices of VND200,000 ($8.71) a night.
Some downtown addresses that should be considered are Primrose Homestay Cao Bang, Son Tung Hotel, Jodevi Homestay Cao Bang, and Jeanne Hotel with prices of VND300,000 a night. 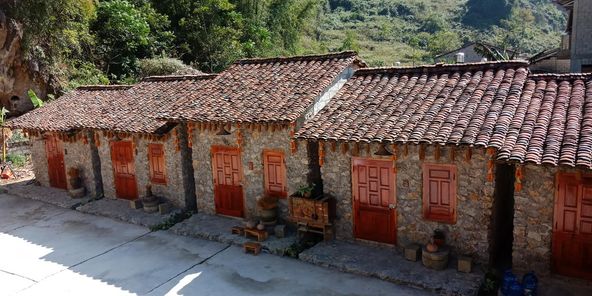 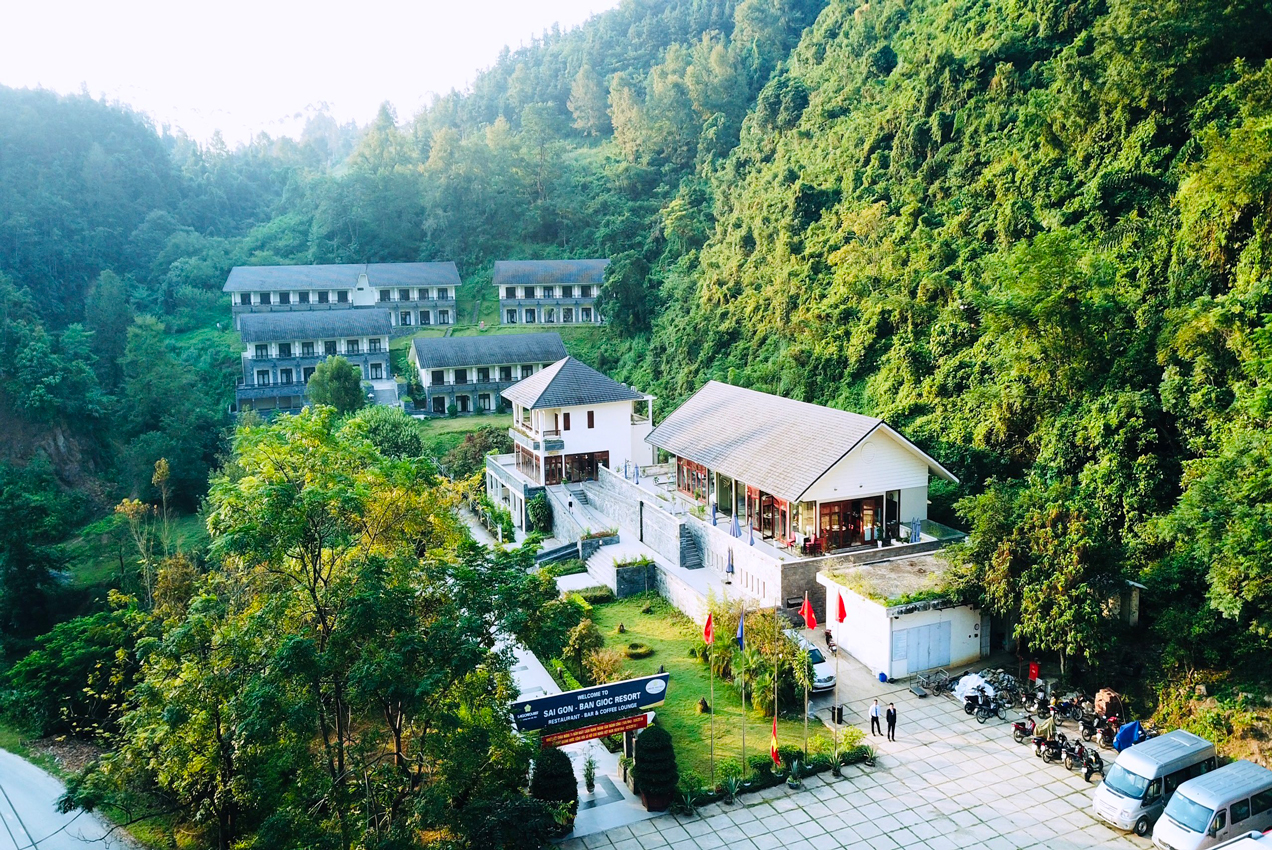 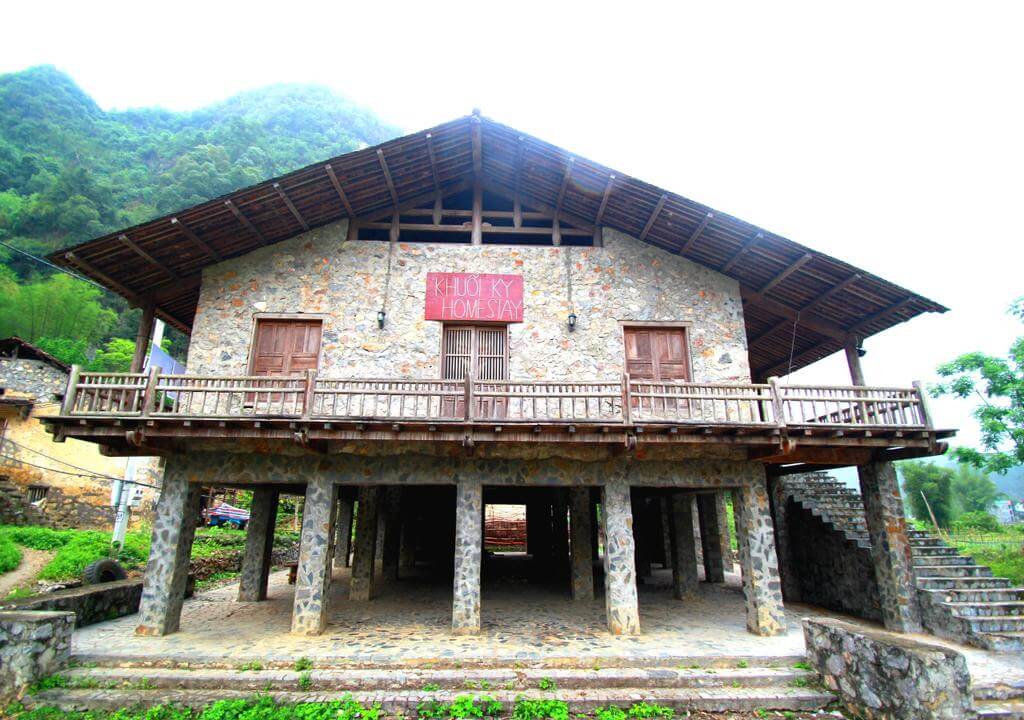 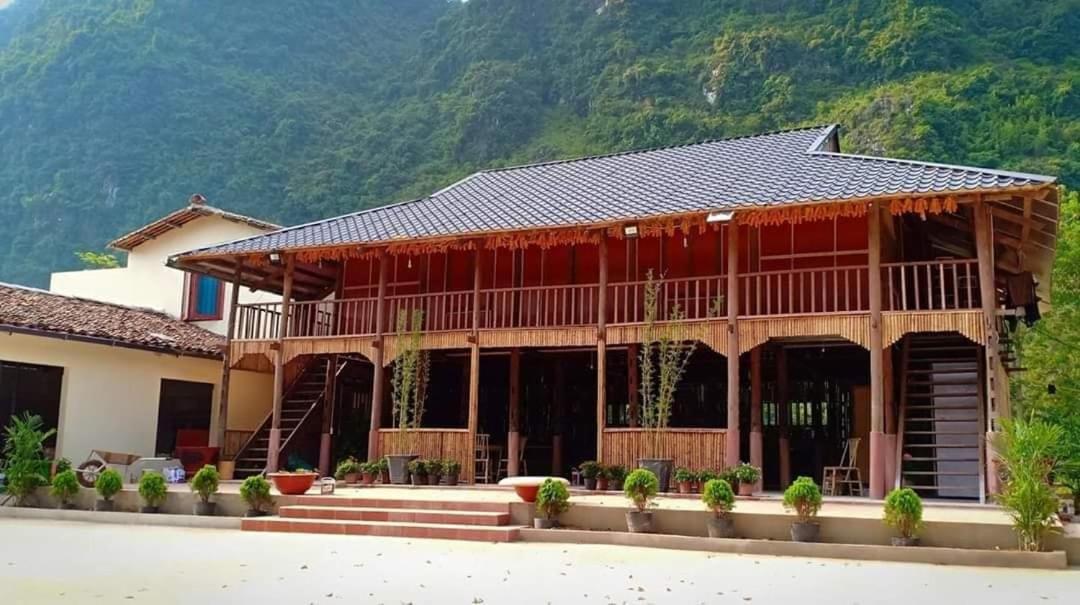 Homestay options in Cao Bang. Photos courtesy of the homestays
If you want to enjoy a luxury stay, Saigon-Ban Gioc Resort near Ban Gioc Waterfall in Trung Khanh District with 53 rooms could be an option, as the only four-star accommodation facility in Cao Bang.
WHERE TO VISIT
For a three-day itinerary in Cao Bang, here are some places not to be missed.
The first place during your journey should be Non Nuoc Cao Bang, a geopark founded in 2015 and covers 3,000 square kilometers.
Its collection of fossils, sediment, volcanic rocks and karst landscape is believed to illustrate 500 million years of the earth’s history. 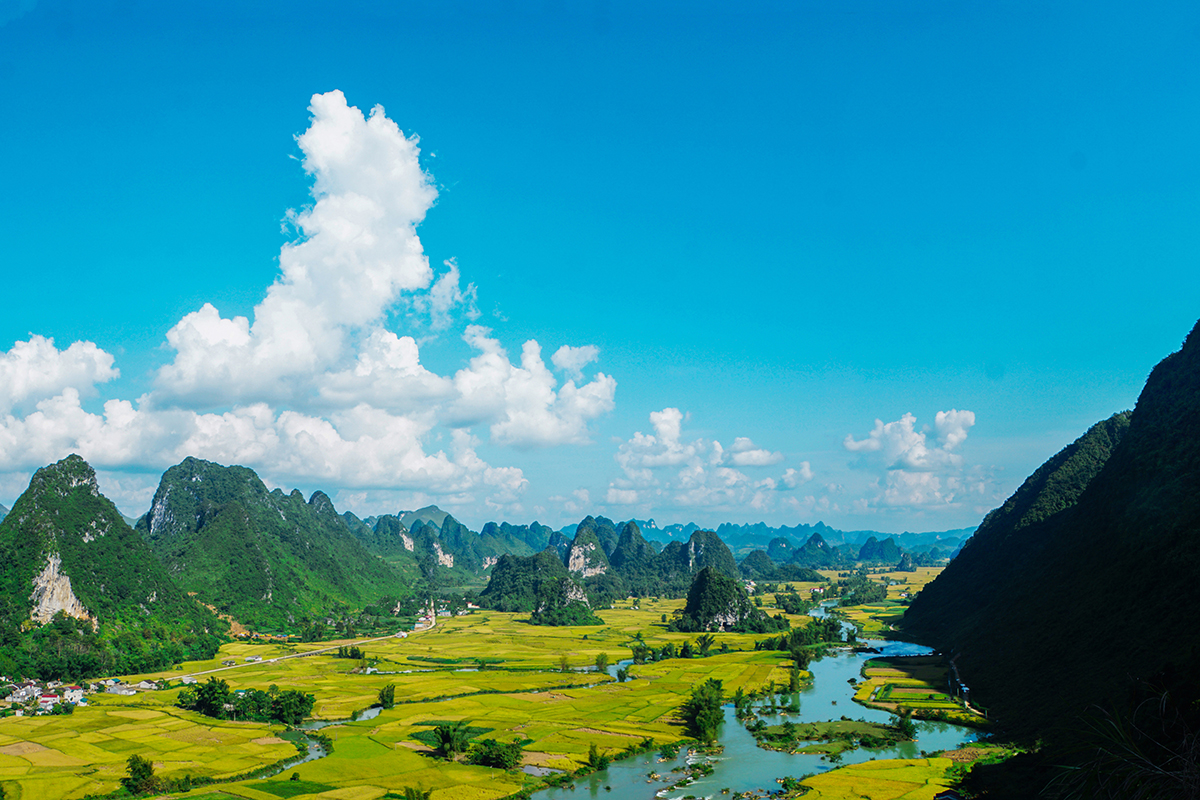 Ngoc Con Commune in Trung Khanh District, part of Non Nuoc Cao Bang geopark, during the golden rice season. Photo by VnExpress/Pham Khoa
Once a remote and lesser-known destination on the tourism map, Non Nuoc Cao Bang, which literally means mountains and water of Cao Bang, catapulted to global fame since it was declared a new global geopark by UNESCO in 2018, making it the second of its kind in the country after Dong Van Plateau in Ha Giang Province.
With 90-percent mountainous terrain, the area is inhabited by nine different ethnic minority groups, including the Nung, Tay, Hmong, Dao and San Chay.
Inside the geopark are scenic spots like Ban Gioc Waterfall, Pac Bo Cave, Thang Hen Lake and Phia Oac eco-tourism area.
Pac Bo Cave (also known as Coc Bo) is named after a small village in Cao Bang that served as President Ho Chi Minh's residence in the winter of 1941 following his return after 30 years in exile. It has become a popular tourist attraction with the Ho Chi Minh Shrine, Lenin Creek and Karl Marx Peak. 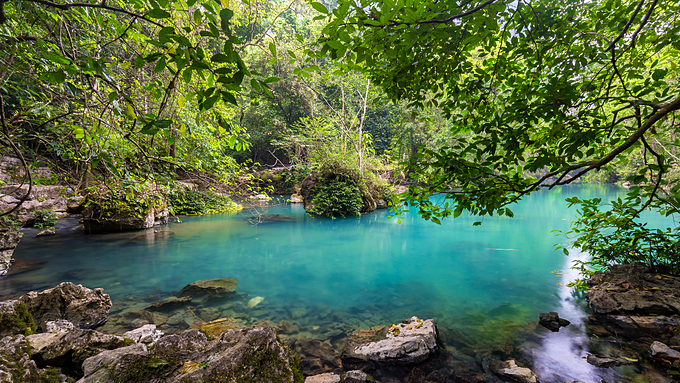 A pool with turquoise water at Lenin Creek where swimming is banned. Photo by Shutterstock/Jimmy Tran
The first thing that catches the eyes of visitors is the turquoise water of the famous Lenin Creek with the signboard that said President Ho Chi Minh used to sit there fishing after work in 1941.
Swimming is strictly forbidden in Lenin Creek as it is sacred to Vietnamese.
Ban Gioc Waterfall, which straddles the China border 30 kilometers from the central market of Cao Bang's Trung Khanh District, is the largest waterfall in Southeast Asia and the world’s fourth largest along a national border after Iguazu, Victoria and Niagara.
The waterfall is 53 meters high and 300 meters wide and has three levels of smaller waterfalls.
There is a small sloping path to the waterfall. Buses with a seating capacity of 25 or less can travel down the path while bigger ones drop their passengers off at a parking lot at the Vietnam border station for them to walk down. 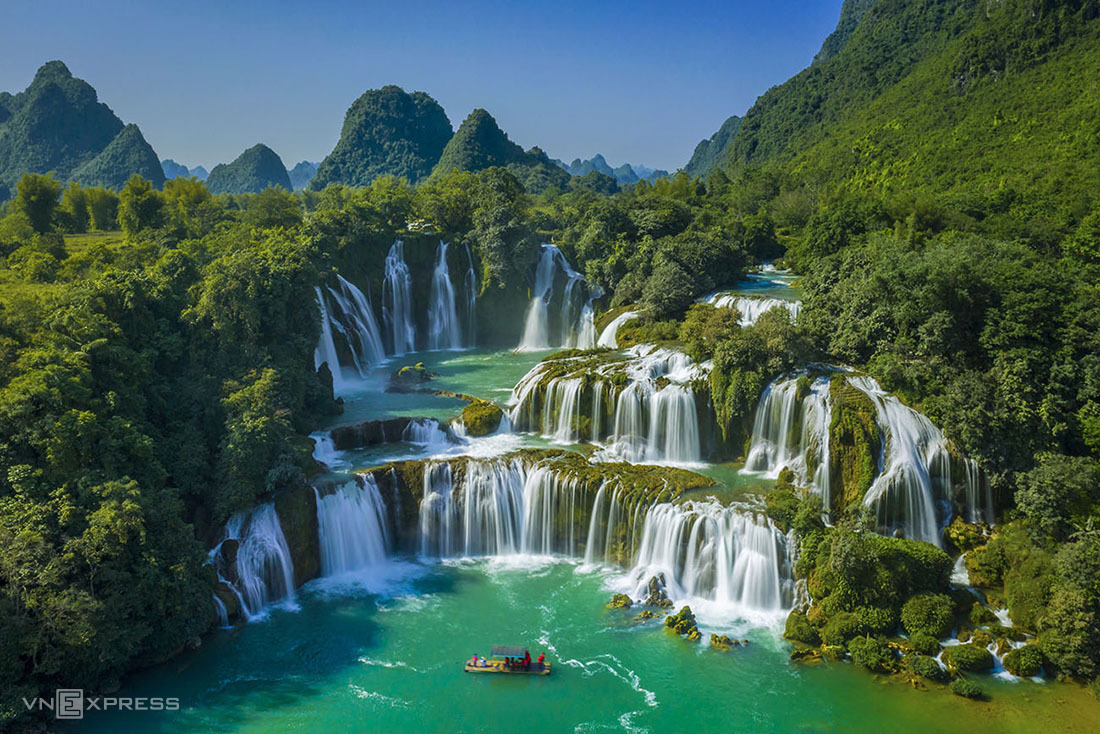 A raft carries tourists to visit Ban Gioc Waterfall in Cao Bang. Photo by VnExpress/Tran Bao Hoa
Three kilometers from Ban Gioc Waterfall lies Nguom Ngao, a stunning cave with stalactites in various shapes and sizes.
Created by an underground river, it runs several kilometers and was where villagers sheltered during the country's 1979 border war with China.
It takes around one hour to walk through Nguom Ngao. Locals discovered the cave in 1921, but it was not opened to tourists until 2006 when paths were built for visitors. 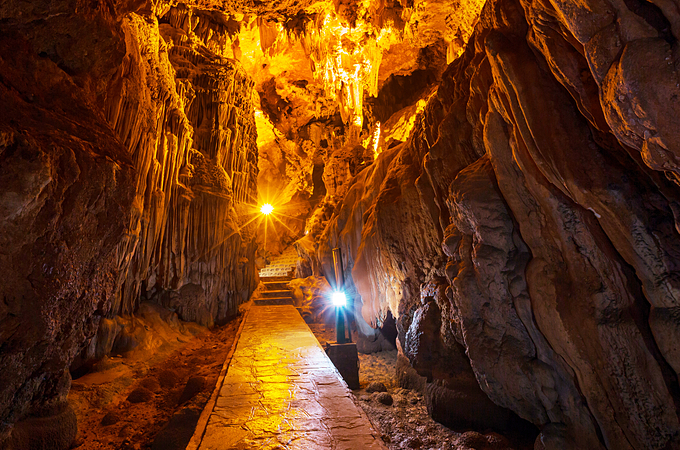 Inside Nguom Ngao Cave in Cao Bang Province. Photo by Shutterstock/Jimmy Tran
In the language of the Tay ethnic minority group, "Nguom Ngao" means tiger cave. It is believed that this cave used to be a habitat for tigers, hence the name.
Based on data published by British Caving Association in 1995, Nguom Ngao has a total length of 2,144 meters with three main entrances and thousands of caverns. Inside is a collection of tiny limestone cliffs and unique stalactites that took millions of years to form.
Thang Hen Lake is 30 kilometers north of Cao Bang's capital town, but since the road there is twisting, it can take around an hour to reach.
The lake is made up of 36 smaller lakes that are all connected through caves and underground passageways. 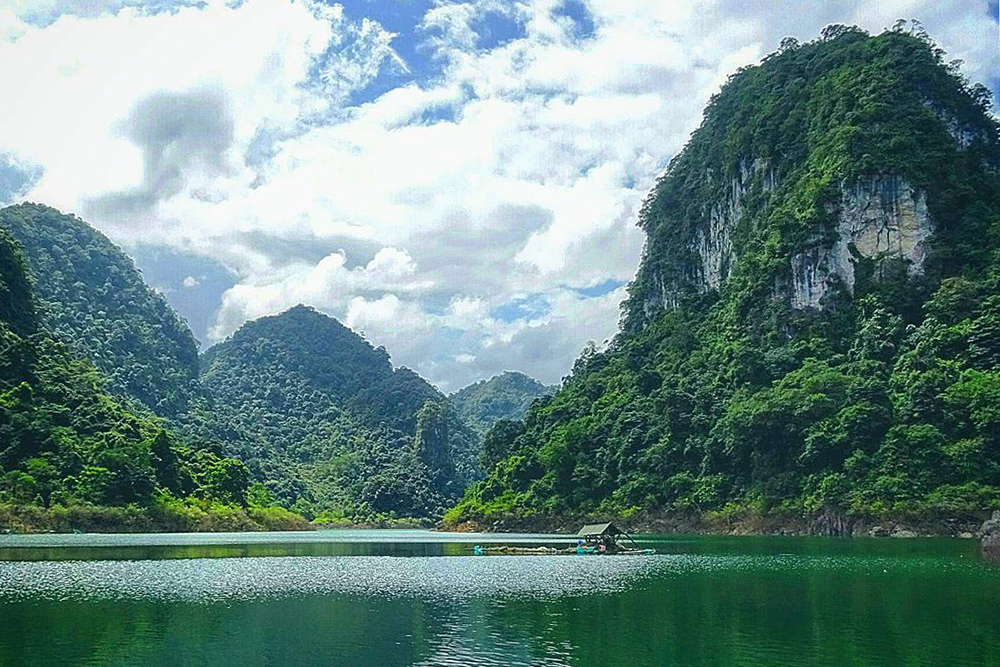 Thang Hen Lake in Cao Bang Province. Photo by Kieran Turner-Dave
During the dry season the water level drops, showing the 36 distinct lakes. The best time to visit is the monsoon season (from May to October) when the water level rises and links all of them into one big lake.
Unlike other lakes that turn brown during the rainy season, Thang Hen stays blue all year round since it is fed by clear pure water from a cave above.
At a height of 1,931 meters above sea level, Phia Oac mountain is the second highest mountain in the province after Phia Da.
During the winter season from November to January, tourists always flock to the mountain range to admire the white frost as temperatures plunge to sub-zero degrees Celsius. 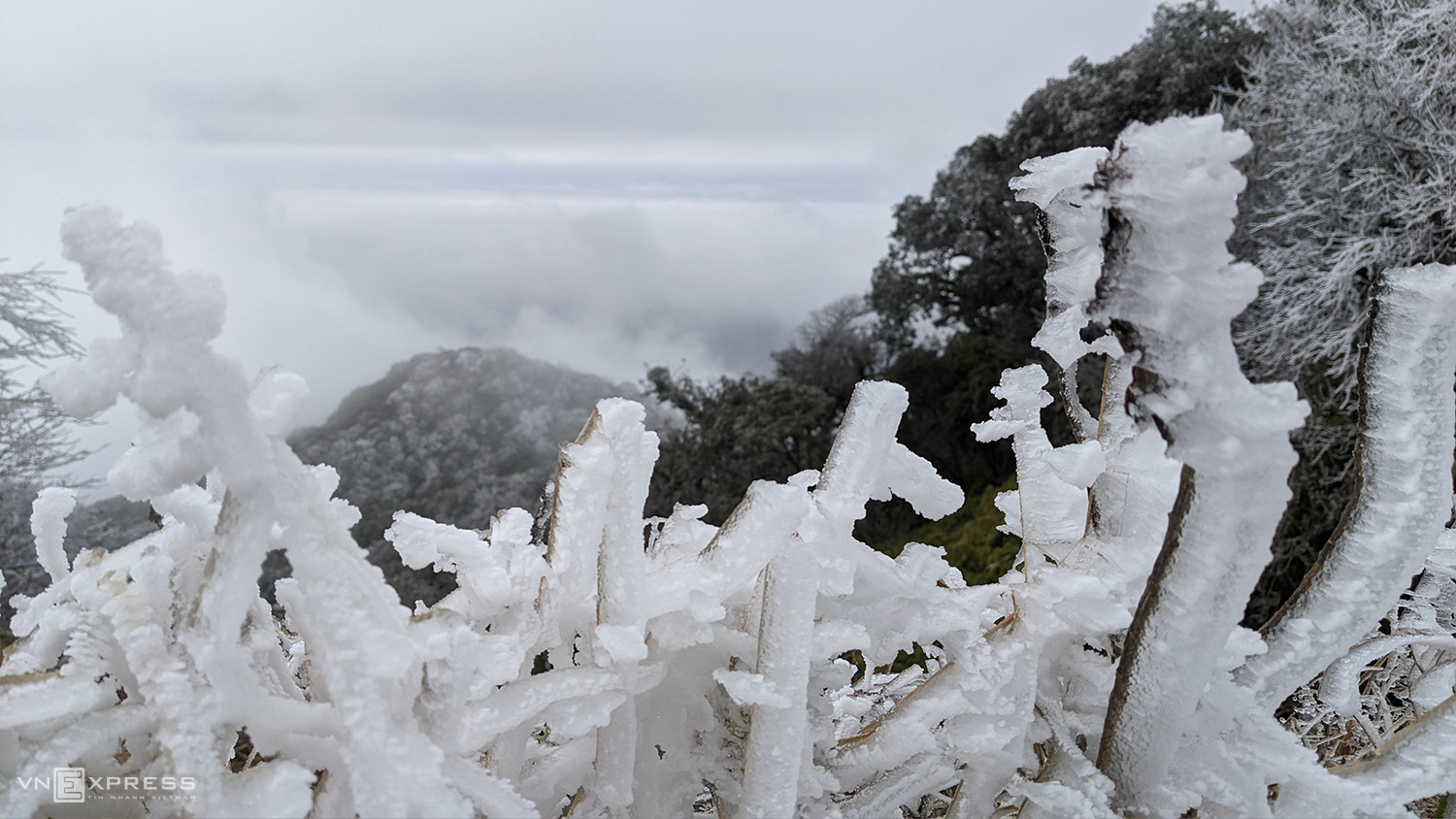 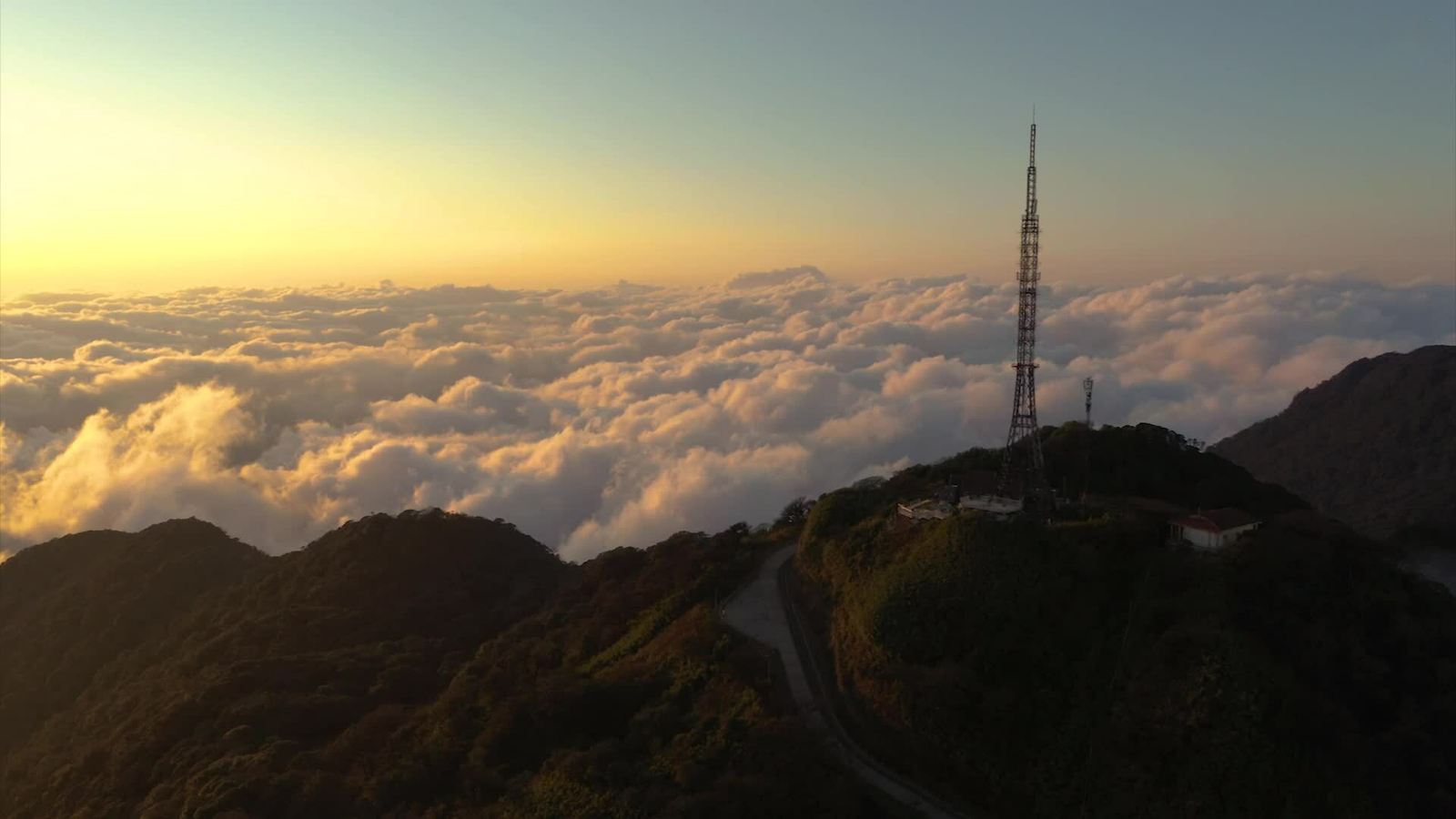 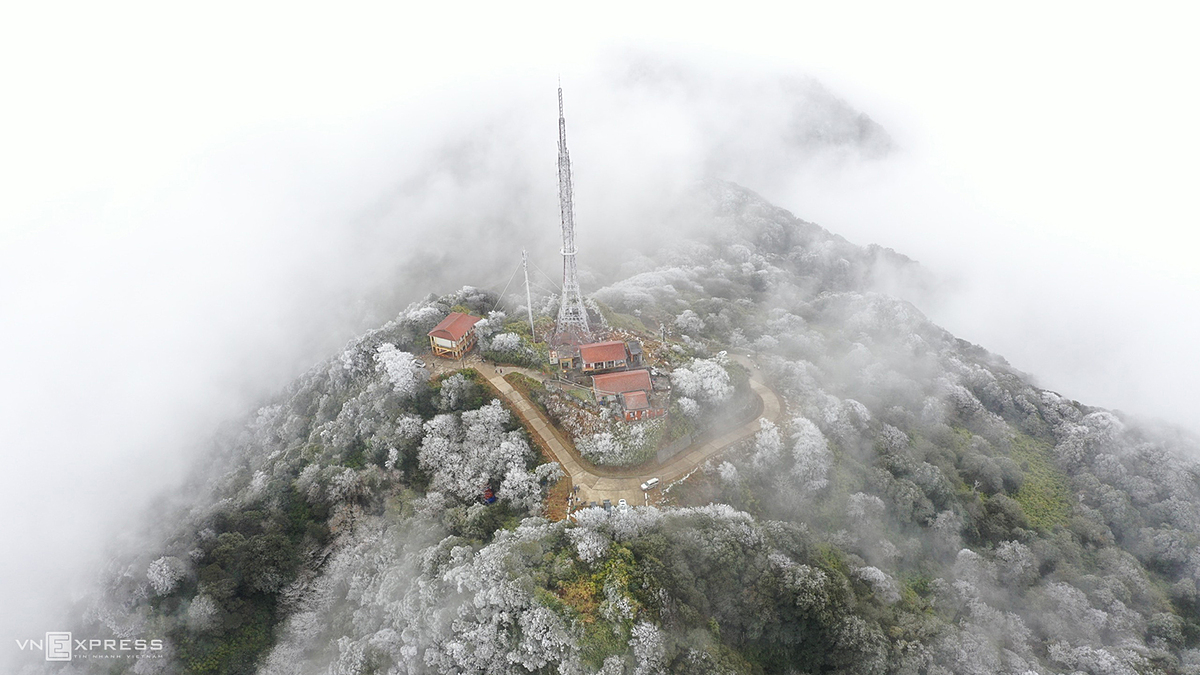 Phia Oac Mountain in Cao Bang.
Cao Bang is dotted with small villages hidden in valleys, the countryside and mountains with some even dating back to French colonial times. You can visit Phia Thap Village to see the traditional way of making incense or Pac Rang Village, famous for its blacksmiths.
The incense making craft of the Nung ethnic minority in Phia Thap Village has a long history.
Phia Thap incense is made entirely from natural materials, including bamboo, the bark of the cotton tree and sawdust and the leaves of a wild tree named "bau hat" to make the glue for bonding the materials together. 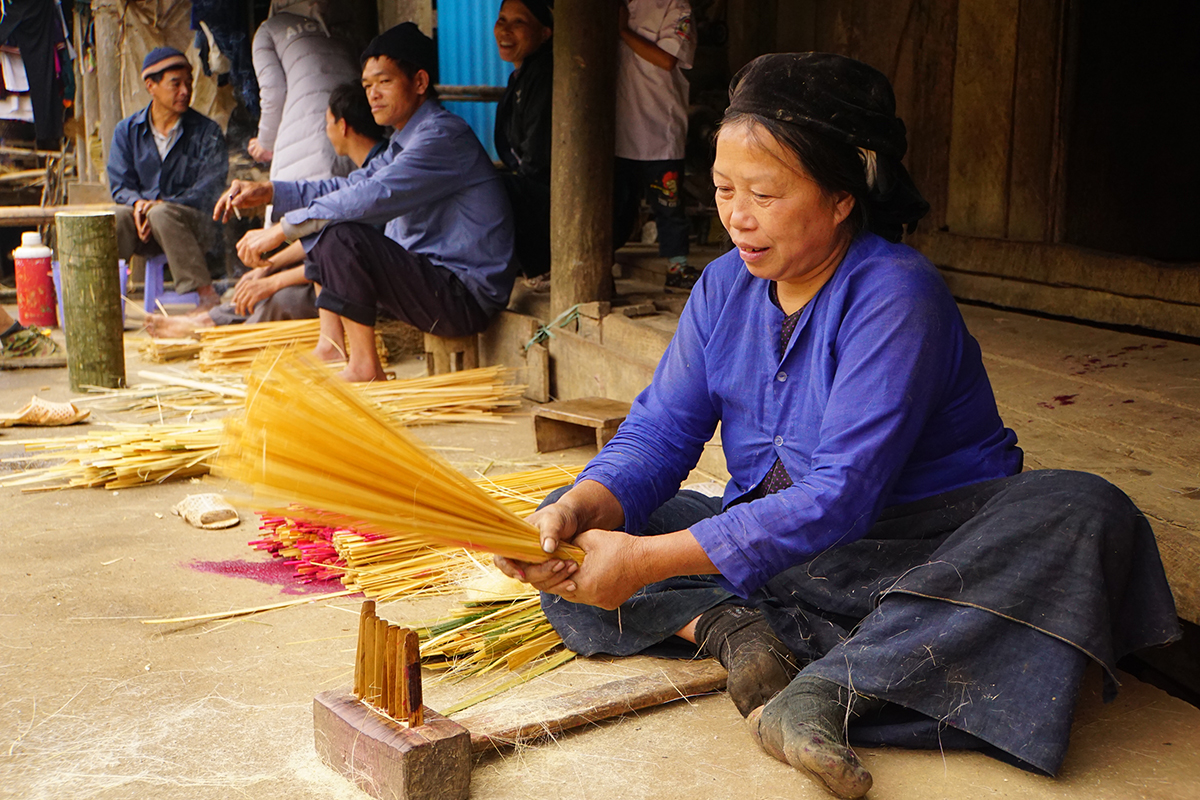 Hoang Van Ut, a local, said after drying the sticks his family would dye their bottom red and tie them into bundles to sell in mountain markets. Visitors can buy three bundles for VND10,000 ($0.43).
Nestled at the foot of Phja Cao Mountain in Ha Lang District, around 100 kilometers from downtown Cao Bang, Na Vi Village is surrounded by the green color of bamboo groves and rice fields. This area is close to Quay Son River, forming a natural border with China to the north. 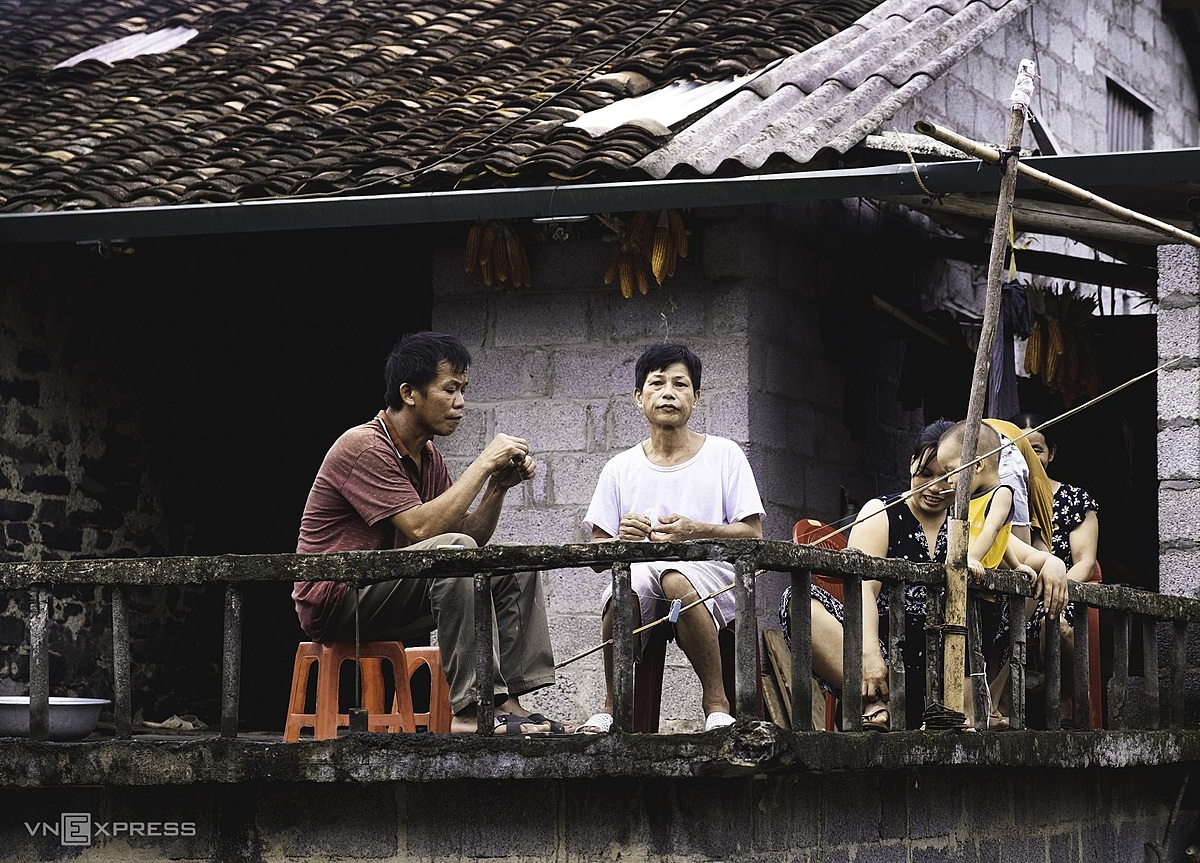 A Tay family sit in their stone house inside Na Vi village in Cao Bang. Photo by Ha Cuong
The village is home to 100 ethnic Tay families living in centuries-old stone houses. Na Vi is one of the few places to retain traces of Mac Dynasty (1527-1595), a royal family in Vietnam’s feudal history. Local authorities plan to develop community-based tourism in the locality.
WHAT TO EAT 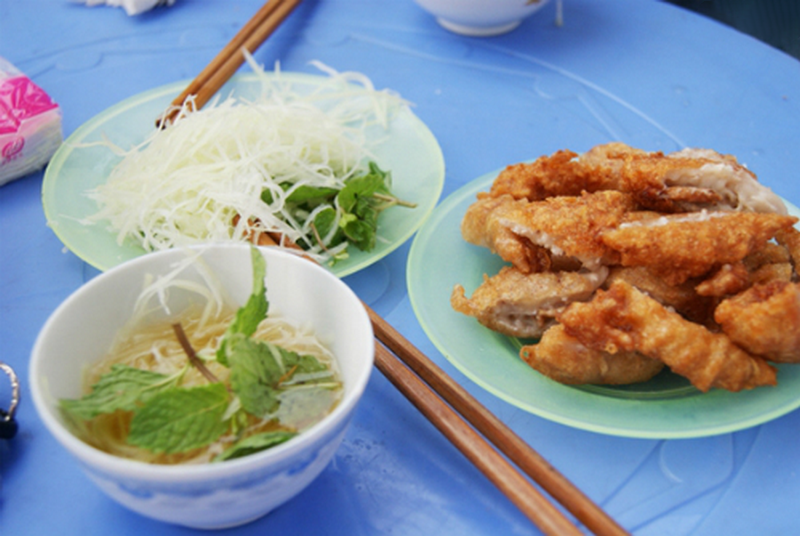 Banh ap chao, or fried duck meat cake is served at a stall in Cao Bang Town. Photo by Anh Tu
Banh ap chao, or fried duck meat cake, is a popular street food in Cao Bang.
The crust is a dough mixture of rice flour, glutinous rice flour and soybean. Locals use newly harvested rice, soak it in water for half a day to soften and grind it into flour. Soybeans and egg yolks are added to the flour to make a batter.
The filling is made from duck meat deboned and marinated just like roasted duck. It is then deep fried in a large wok in hot oil and flipped over until golden brown on both sides. Ms. Hac's stall at 116 Hien Giang Street is one place to try this. 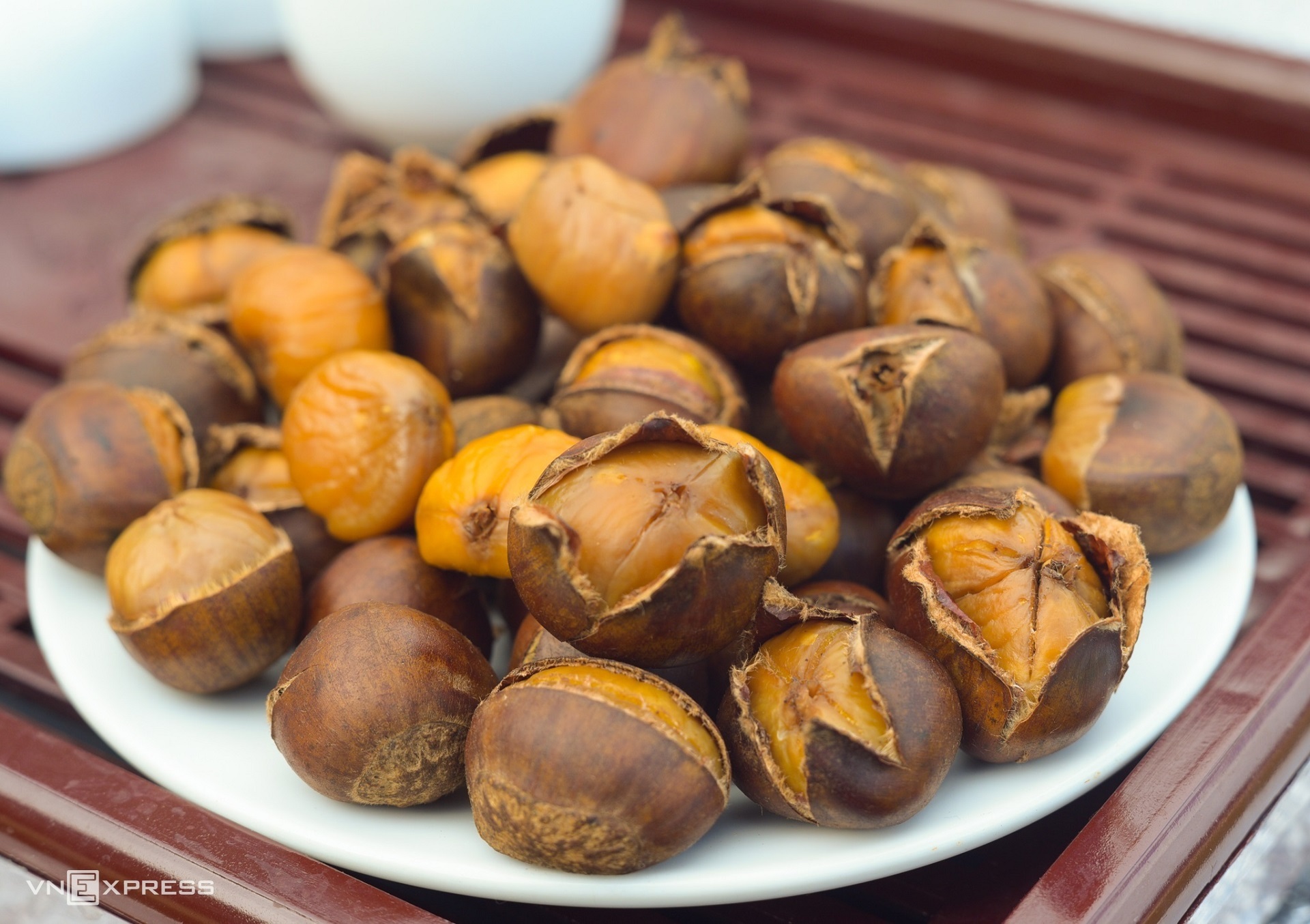 Trung Khanh chestnut. Photo by Mac Kham
For snacks, one can try Trung Khanh chestnuts from Trung Khanh District. Since the district enjoys cool weather and ideal soil, chestnuts here have a subtle richness unlike the mild taste one would normally associate with them.
Roasted, steamed or dried chestnuts are all ideal for the rainy season. People also add chestnuts to pork to make a stew or grinding it to a powder for use as cake filling.
Vit quay bay vi, or roasted duck with seven flavors, is another famous culinary specialty of Cao Bang. 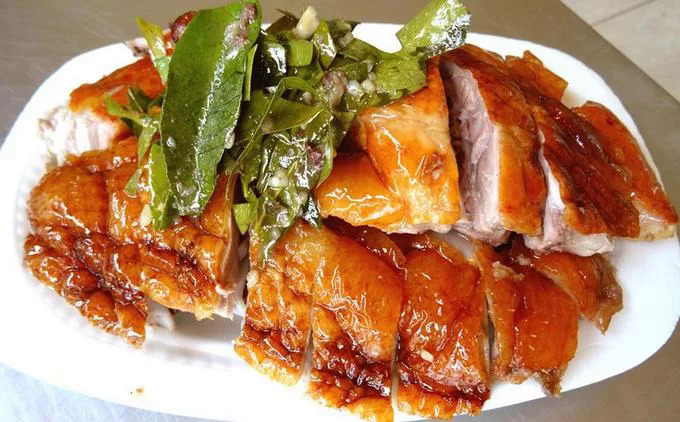 A plate of roasted duck with seven flavors in Cao Bang. Photo by Vi Yen
The seven flavors refer to seven spices and condiments used to marinate the duck - ginger, garlic, dried onion, pepper, honey, tofu, and dried leaves of clausena (mac mat in Vietnamese) that grows in Cao Bang's forests.
The duck is then roasted with crispy golden-brown skin outside and tender meat inside.
Sour pho is a specialty one should not miss in Cao Bang. This dry pho is different from the southern version thanks to a combination of herbs, roasted peanuts, pork, duck, and a sour sauce made from lime. 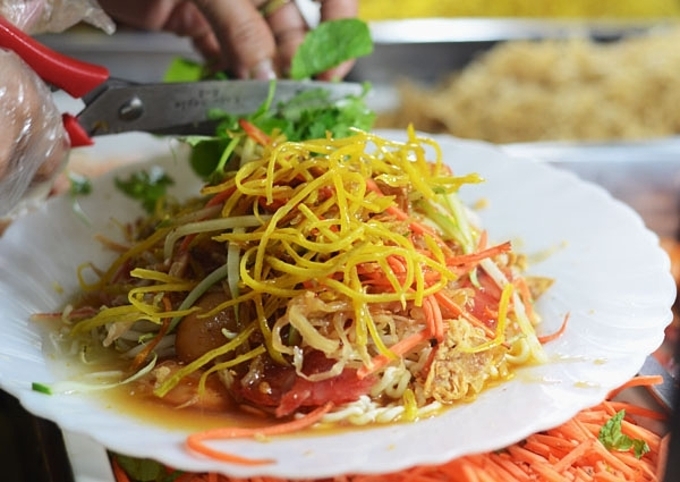 A plate of sour pho in Cao Bang. Photo by Shironeko
It's not difficult to find stalls selling this treat in Cao Bang but Ms. Quyen's stall on Ly Thuong Kiet Street and another stall near Hien River Bridge in Cao Bang Town are highly recommended.
Du Hy, Hoang Phong
You must log in or register to reply here.
Share:
Facebook Twitter Reddit Pinterest Tumblr WhatsApp Email Link
Top Bottom