travel Lắk Lake, a peaceful spot in the Central Highlands 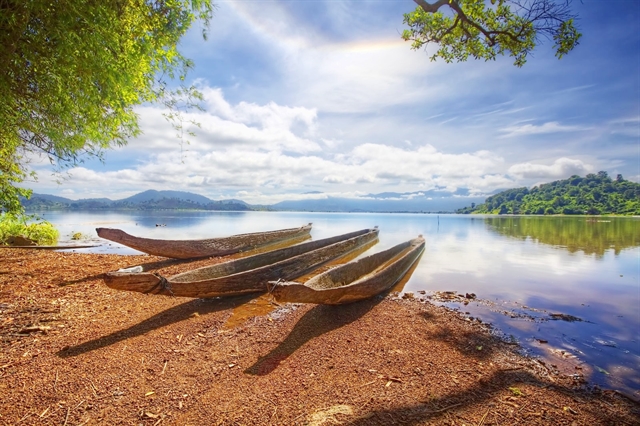 Lắk Lake is an attractive destination among the mountains and forests of the Central Highlands.
By Lâm Giang

Lắk Lake is an attractive tourism destination among the mountains and forests of the Central Highlands.

We were lucky enough to visit this place after a three-day assignment in Đắk Lắk Province.

It is the largest natural freshwater lake in Đắk Lắk and the second largest lake in Việt Nam (behind Ba Bể Lake in Bắc Kạn Province). It is located at an altitude of more than 500m above sea level with the main water supply coming from the Krông Ana River.

The lake is about 56km south of central Buôn Ma Thuột City. On the route connecting Đà Lạt City and Buôn Ma Thuột, we followed Highway 27, followed Lạc Thiện Pass for about 10km, then we reached the destination.

Lắk Lake is surrounded by many hills and mountains, especially upstream is the Chư Yang Sin mountain range with its peak of 2,442m above sea level and vast primaeval forests with rich flora and fauna. As a result, the water source in the lake rarely dries up, even in the dry season in the Central Highlands.

It is like an iridescent silk strip in the middle of the majestic Central Highlands. Coming to the lake on a windless day, we could admire the wonderful beauty of nature. The lake's surface is deep blue, reflecting the clouds in the sky and rows of solid pine trees. In the distance, we were able to see lotus flowers and water lilies with brilliant colours, shimmering on the corner of the lake.

The gusts of wind passed by, creating small waves on the surface. That cool breeze helped blow away our worries and sadness.

Camping on the bank of Lắk Lake. — Photo Pơ Lang Tour
According to elderly people in the area, the legend of Lắk Lake is associated with the brave man Lắk Liêng -- a son of the M’Nông ethnic group.

Once upon a time, the battle between the Fire God and the Water God took place and lasted for many seasons. Victory went to the Fire God, causing the M’Nông village to sink into drought.

However, at that time, a love affair between a girl in the village and the Fire God led to a boy named Lắk Liêng being born. Growing up, Lắk Liêng went to find a source of water as a way to atone for his parents' mistakes with the village.

He searched for a long time. One day, he saved a deer stuck in a rock and the deer led him to a wide and deep lake. Villagers followed Lắk Liêng to live here peacefully, and this is Lắk Lake today.

For a panoramic view of the lake, we visited Bảo Đại Palace, a resort at the hilltop overlooking the lake. Bảo Đại Palace is the place where King Bảo Đại, the last king of the Nguyễn dynasty, used to come to enjoy the view and rest when he visited Đắk Lắk.

The palace is a three-storey building, built in a modern architectural style. Its rooms all have large windows with beautiful views on all four sides.

From the palace looking down, we could see the sparkling lake surface. In the distance are the villages of the M'Nông people looming behind the forest trees and lying in the middle of the green rice fields all year round. 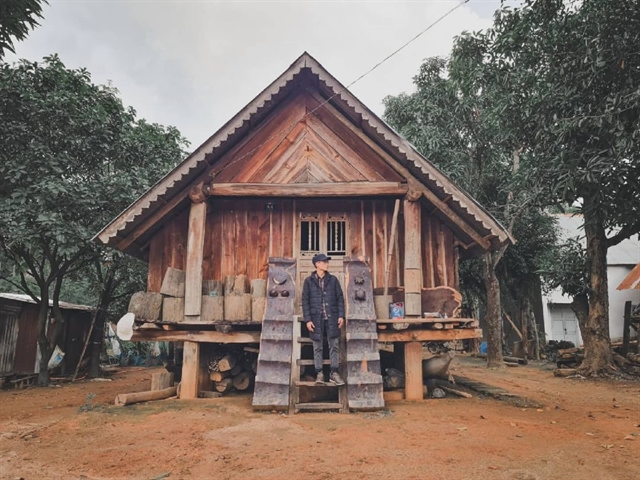 A house on stilts in Jun Village which lies on the side of Lắk Lake. — Photo digiticket.vn
Unique culture

The houses on stilts carry the traditional architecture of the Central Highlands ethnic group. It was the first image we saw when we entered the village.

The sound of the handloom weaving in the houses echoes out into the alley.

Grilled snakehead fish with salt, a speciality of people living around Lắk Lake. — Photo digiticket.vn
Lắk Lake has become an attractive tourist destination, not only in Đắk Lắk but also in the Central Highlands as a whole. Many tourists come here to enjoy the beauty of the lake, discover the unique traditional culture of the M'Nông and enjoy the food while sightseeing around the lake.

The first speciality that must be mentioned is chả cá thát lát (fried thát lát fish) raised in Lắk Lake. It is very crispy and delicious with a special flavour. 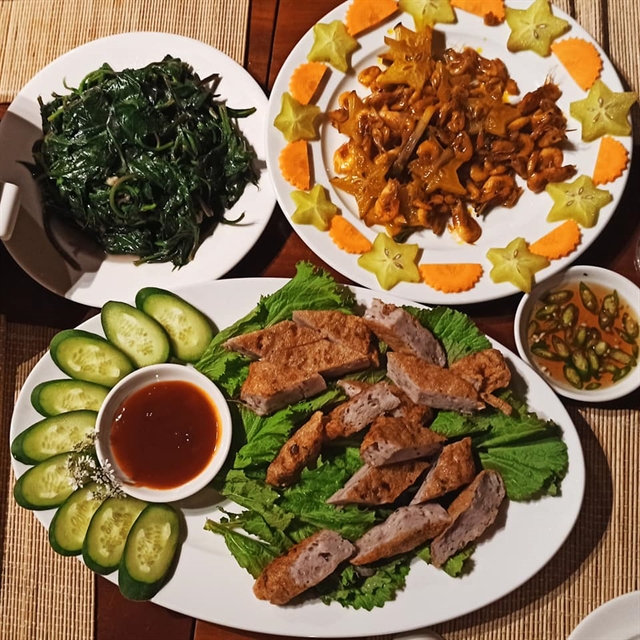