cuisine Potstickers with a crispy edge in Saigon point to Taiwan

Whenever Taiwanese cuisine is mentioned in Vietnam, the first term that pops up is tra sua or milk tea. There’s much more to it, of course.
Similarly, one assumes that the best place to find Taiwanese food, which many consider a derivative of Chinese cuisine, would likely be Cho Lon or its somewhat blurred geographical boundaries extended over numerous decades thanks to Vietnamese-Chinese influence.
Well, assume again.
Once Vietnam embarked on its Doi Moi, or open-door policy more than three decades ago, Taiwanese merchants were one of the first to arrive in Ho Chi Minh City, seeking affordable labor and land to start factories.
Today, most of this activity in the country's south continues in Binh Duong province and Ho Chi Minh City's Binh Tan District where the Taiwanese shoe manufacturing industry flourishes. It is here that one can find samples of authentic Taiwanese cuisine.
And it is here that one comes across a dish that's a treat for the eyes and the palate - "snowdust" potstickers - an iconic highlight of Taiwanese cuisine. 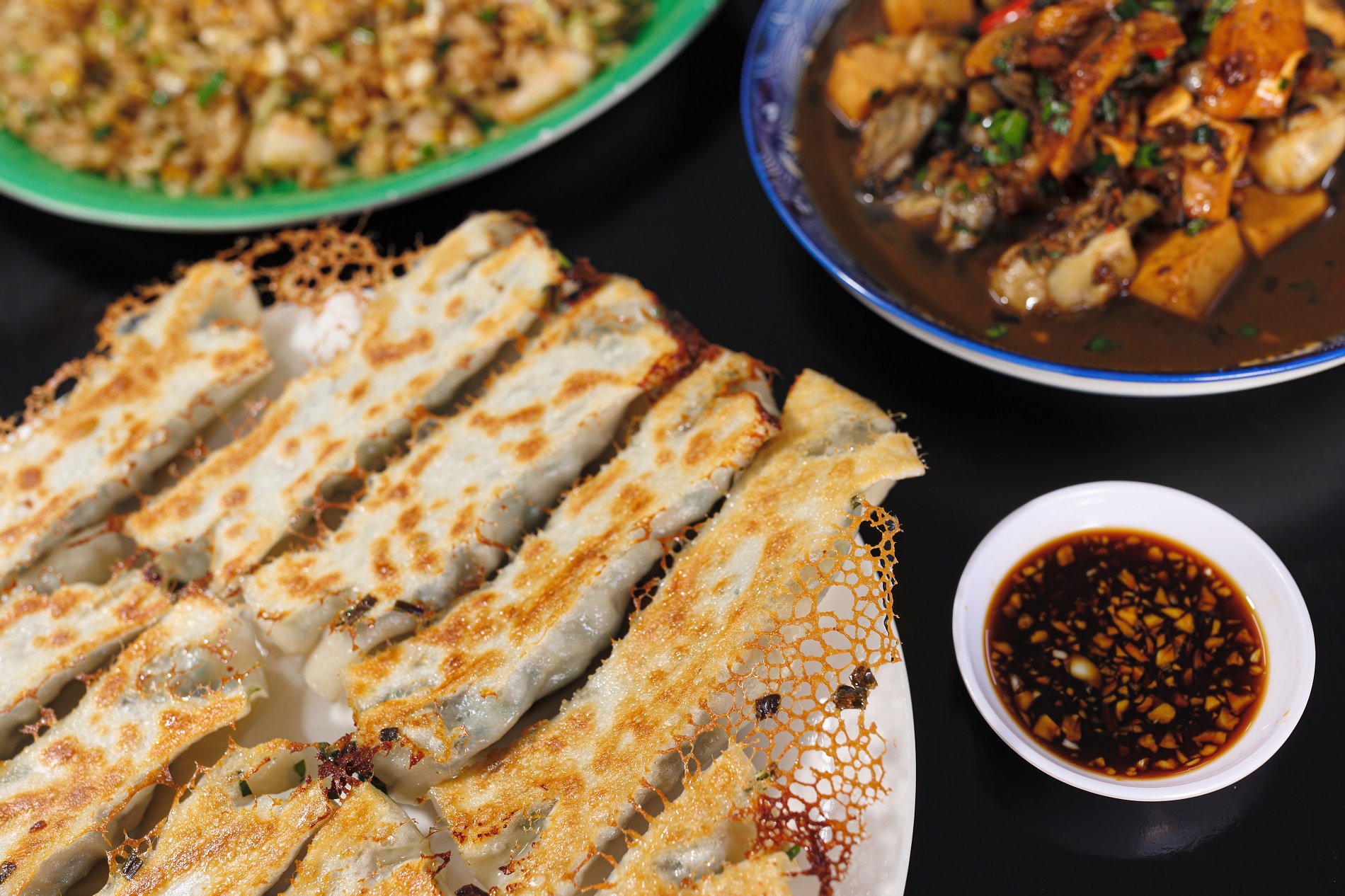 A plate of snowdust potsticker at Cuu Long Sui Cao Restaurant in HCMC's Binh Tan District is displayed with a bowl of garlic sauce. Photo to by Mervin Lee
Situated on Ten Lua, one of Binh Tan District's widest roads, Cuu Long Sui Cao (Jiulong Shuijiao in Mandarin) is one of many Taiwanese eateries in the vicinity that cater to hungry Taiwanese expats seeking a taste of home.
The name of the restaurant is somewhat of a misnomer⁠—Cuu Long can mean Hong Kong's Kowloon or a collective region in Vietnam's southwestern Mekong Delta area, and the word Sui Cao likely triggers memories of yellow lye-dyed Cantonese-style soup dumplings filled with shrimp and/or meat.
Indeed, Taiwanese chef and Cuu Long owner Cheng Jenyu serves up formidable plates of pale white Northern-Chinese dumplings filled with chives and minced pork, but the star of the show at Jiulong Shuijiao happens to be rather unique to the humble joint itself⁠—Taiwanese potstickers. 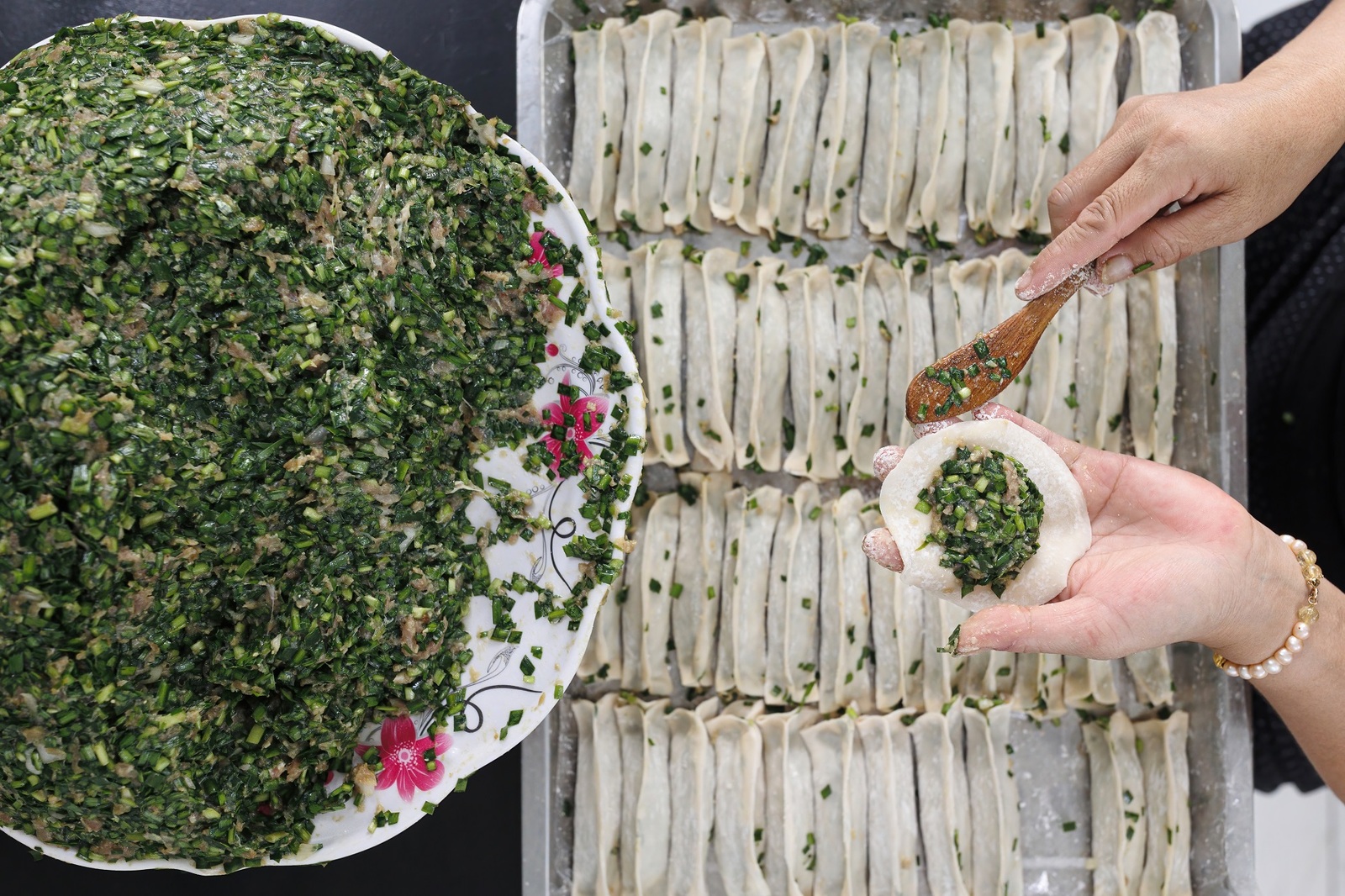 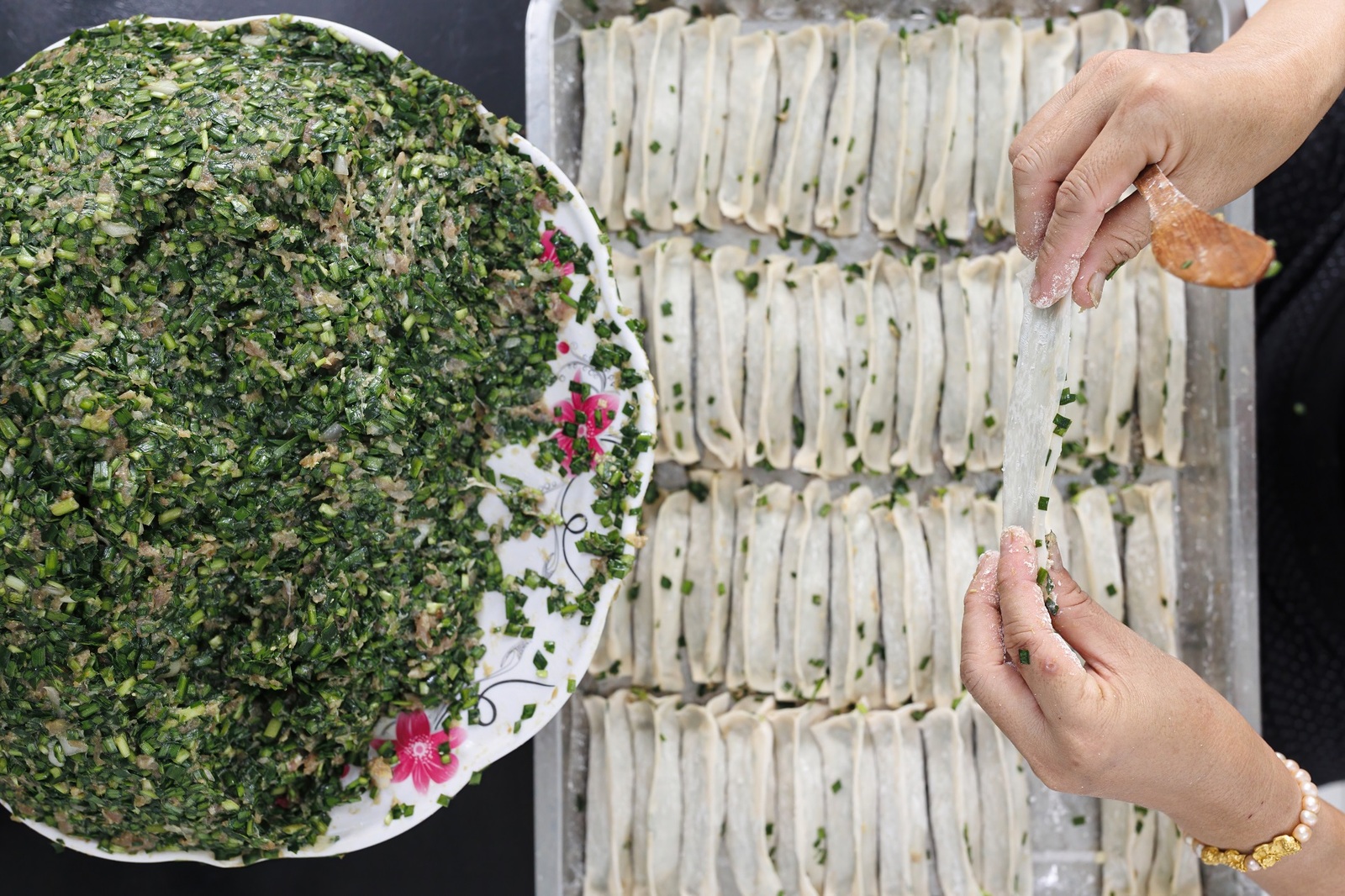 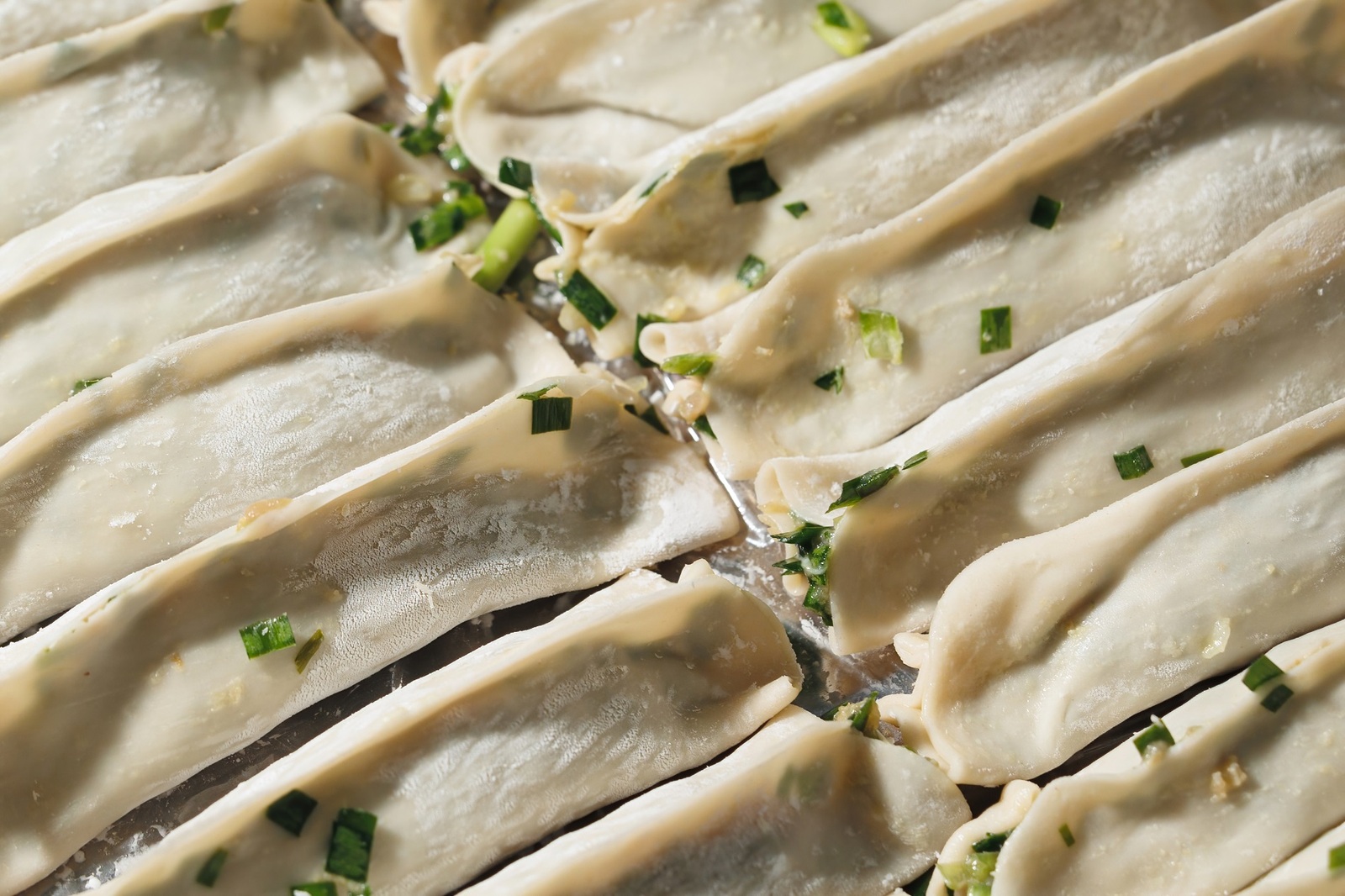 The making of snowdust potstickers at Sui Cao Cuu Long: Dumpling wrappers are filled with pork and shrimp and pulled by hand. Photos by Mervin Lee
"Non-Taiwanese customers often ask me whether this is Japanese gyoza!" Cheng said, explaining how the restaurant's signature snowdust potstickers resemble gyoza cooked with a similar layer of crispy, burnt batter—commonly seen at places that serve ramen.
We did not attempt to investigate the dish’s debatable origin, but the purpose of this crunchy layer goes beyond "trypophobia" and taste."It helps you judge the doneness (of the potstickers) when you fry them," Cheng said.
The popularity of Cheng's dumplings and potstickers means a team of at least four nimble-handed ladies making more than 2,000 pieces a day.
Unlike typical dumplings which are pinched and sealed, potstickers start their life as typical dumpling wrappers which are pulled by hand after fillings like pork and shrimp are added.
The final action of pulling them to completion is itself a testimony of how elastic the dough has to be to make al dente potstickers. 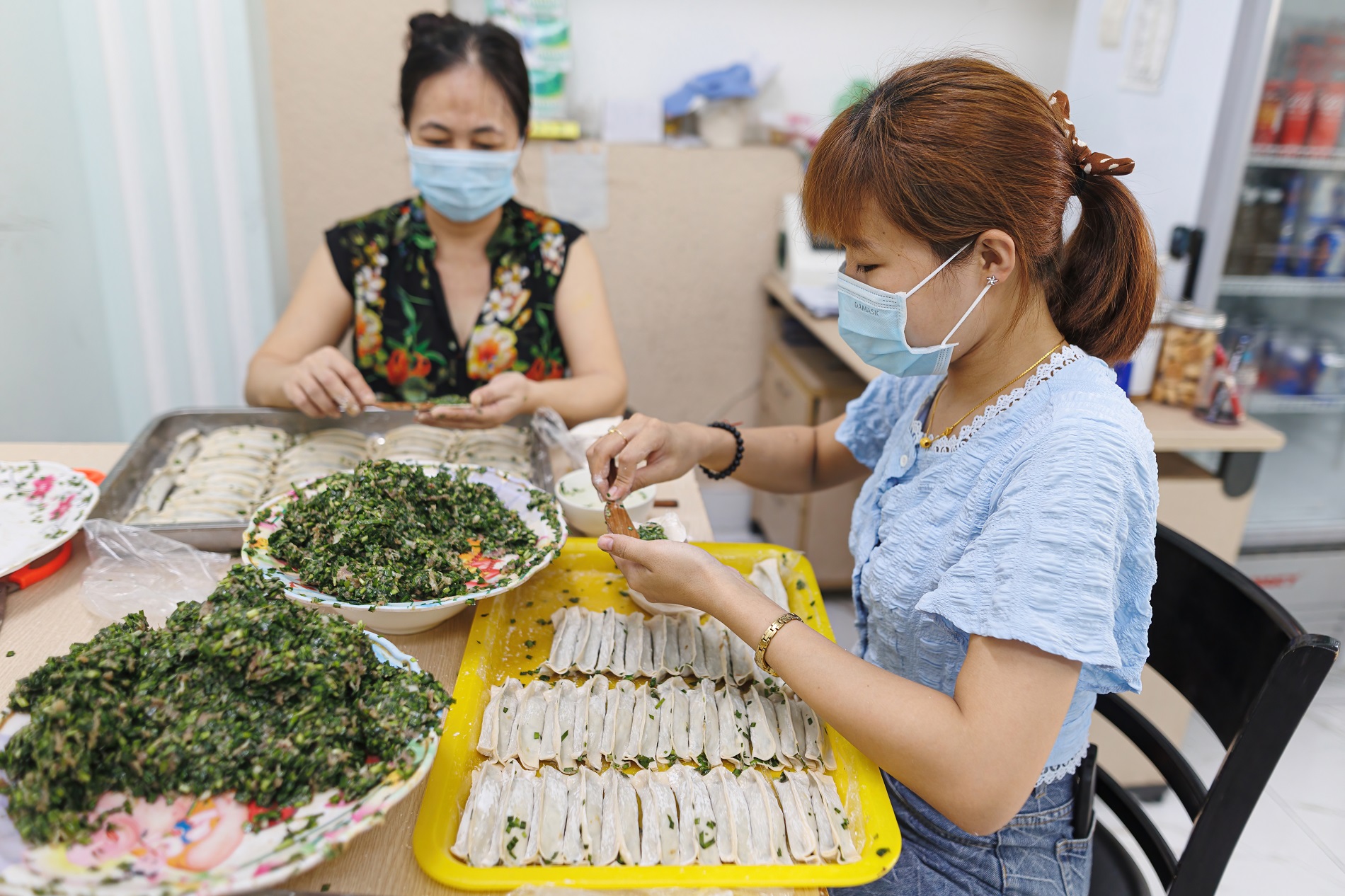 Women make potstickers at Cuu Long Sui Cao. Photo by Mervin Lee
Unexpected rebirth
Ironically, though also a chef in his previous life back in Taiwan, Cheng said that selling dumplings wholesale in Taichung's traditional wet markets was secondary to his Taiwanese-style 'Western breakfast' business that mainly sold burgers, sandwiches, and Taiwanese crepes.
"A friend suggested (starting a restaurant in) Vietnam, so I thought to myself; no one's doing potstickers here yet, so why not?"
Why not, indeed.
Thanks to word of mouth recommendations and frozen dumplings, the restaurant survived the odds even after the pandemic hit just mere months after its opening in late 2019. 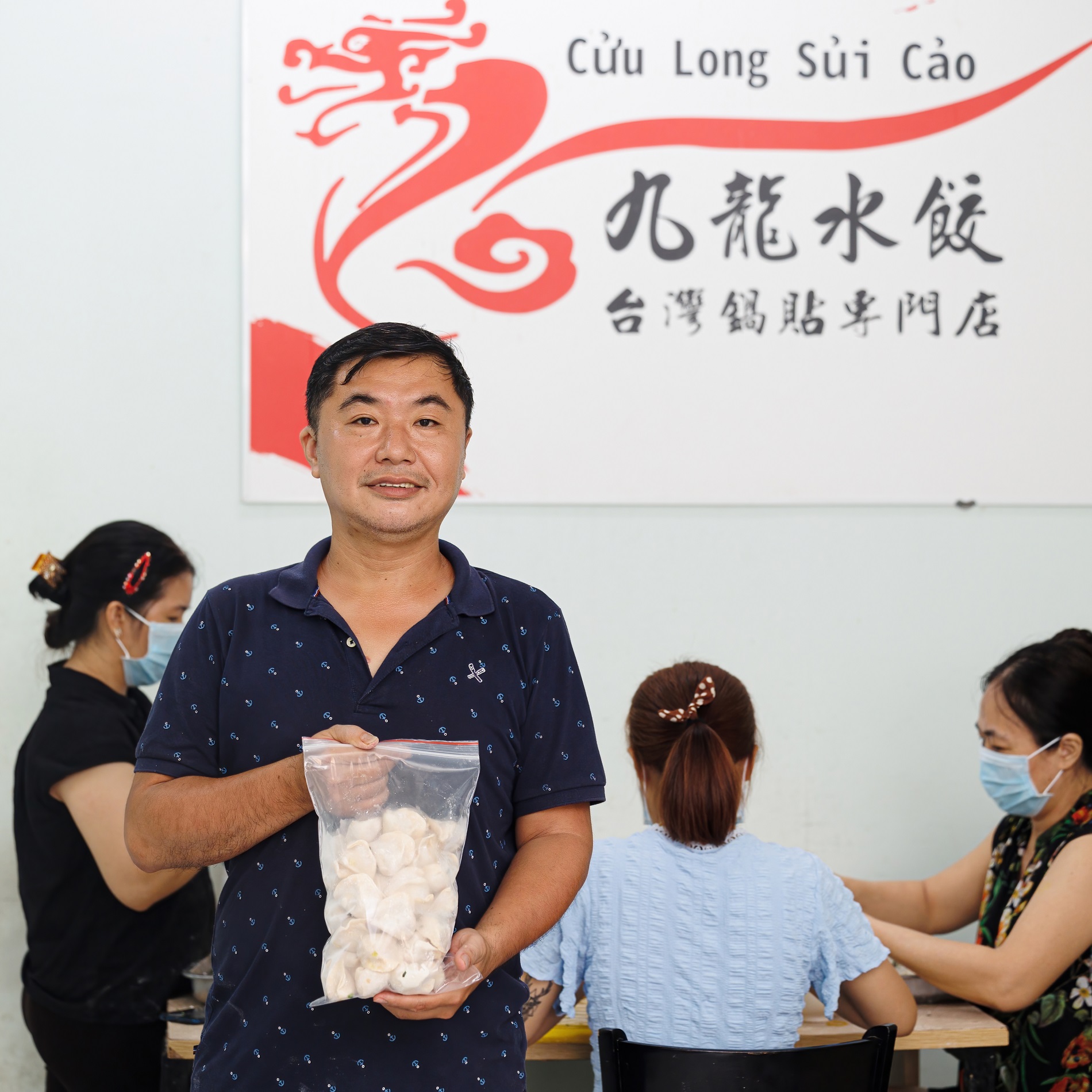 Taiwanese chef and Cuu Long owner Cheng Jenyu. Photo by Mervin Lee
The trick to enjoying this dish to the hilt is to mix one’s own potsticker dipping sauce with the help of squeeze bottles filled with vinegar, flavored oil and soy sauce. A dash of chopped garlic makes it even more true to the Taiwanese spirit. Cheng even had to pre-mix some dipping sauce for confused locals after Sui Cao Cuu Long was made famous for an entire weekend thanks to a local Tiktoker dropping by.
Authenticity rules
The restaurant is also beloved for its moister-than-most Taiwanese-style fried rice that contains cabbage and customer's choice of toppings including eggs, shrimp and julienned pork—the notable use of short-grain rice gives each bite a delightful chewiness.
Rare Taiwanese stir-fries such as oysters with ginger and bean paste fill other parts of the menu. The popular hot and sour soup at Cuu Long Sui Cao is also of Taiwanese descent—milder than its Szechuanese counterpart but similarly filled with a generous amount of sliced mushrooms, tofu and pork.
When asked about 'adapting' to local Vietnamese tastebuds, Cheng insisted that he has stuck to his guns when it comes to authenticity, even though he hopes that more local diners sample traditional Taiwanese cuisine.
It might look like an unassuming venue, but expect to witness unofficial second-round 'meetings' between the upper echelons of different Taiwanese-run companies when you drop by for lunch—nothing unites a bunch of homesick expats like an authentic taste of home.

Since the era of Charlemagne
S

At the same time, many antique
V

only a few survived.
M

book about the chess of love ", created by
S

the best poets of his era and
B