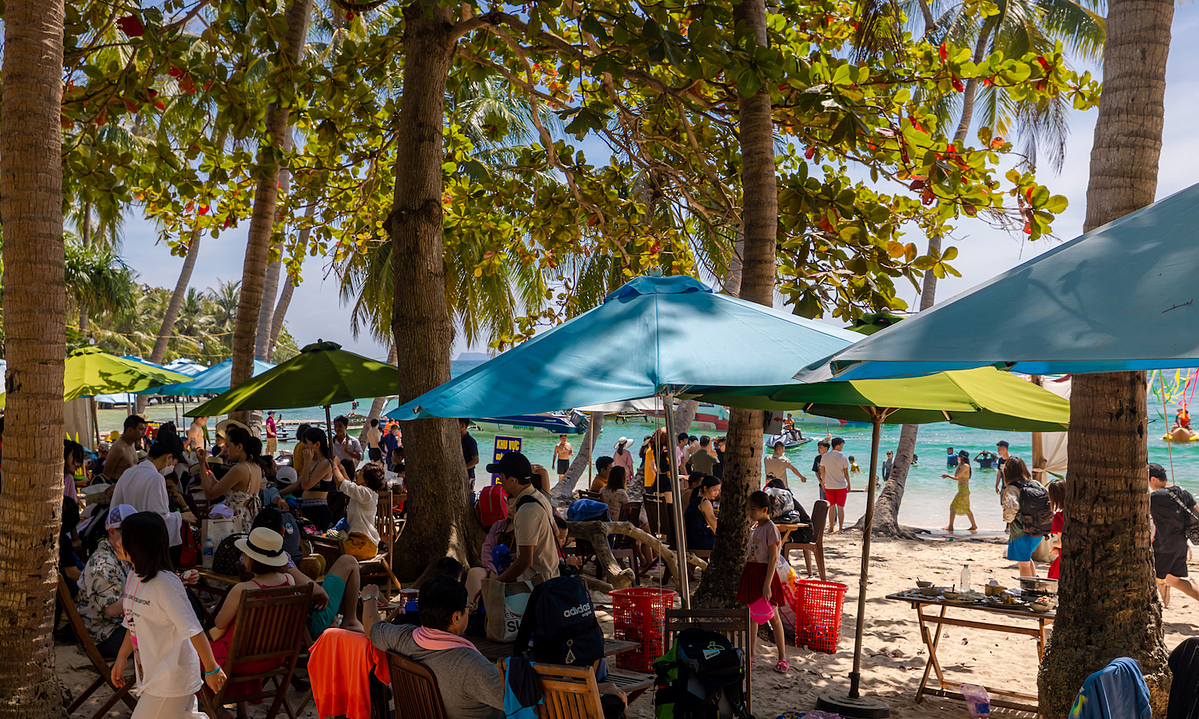 Tourists flood May Rut Islet on Phu Quoc Island in southern Vietnam during the Lunar New Year holiday, February 2022. Photo by VnExpress/Phan Phuong
Half a month ahead of the Reunification Day and May Day break, most hotels in tourist hotspots are already full and many people are unable to book rooms at this time.
Vietnamese people will have four days off for the Reunification Day-Labor Day holiday (April 30 and May 1) as both fall on the weekend.
Thanh Nga, a resident of Phu Tho Province in the north, was planning to visit Phu Quoc Island off the Mekong Delta province of Kien Giang, but has not been able to book rooms at four-to-five-star hotels or resorts in the downtown area.
Currently, a return ticket from Hanoi to Phu Quoc costs VND6-7 million ($261-305), three times the normal price.
"I initially thought we could book hotel rooms via online agencies like Agoda or Booking close to the holiday as we have done before," Nga said.
"Now, my family is considering booking a villa in Flamingo Dai Lai (Vinh Phuc) or visiting Nha Trang (beach town)," she added.
Van An, who works in HCMC’s District 1, said that he and his wife planned a trip to Da Lat several months ago, but only called up homestay facilities last weekend.
Everywhere he received the same answer: "No vacancies." They are now going to move to Nha Trang where they have to accept to stay at hotels far from the downtown area.

Bui Thanh Tu, marketing director of travel firm Best Price, said that the number of guests booking rooms for the Reunification Day holiday in the first half of this year was six times higher than in the first half of last month.
On online tourism booking platform Booking.com, Phu Quoc is one of the hottest tourist destinations during the upcoming holiday, with 90 percent of four-to-five-star hotels nearly full.
Hotels near Nha Trang beach also reached their occupancy rate of over 90 percent.
Cao Tri Dung, chairman of Da Nang Tourism Association, said that the occupancy rate in coastal hotels is more than 90 percent and that of four-to-five-star hotels in general is 60 percent.
According to online booking sites, many luxury hotels such as Mercure Danang French Village Bana Hills, InterContinental Danang Sun Peninsula Resort, Pullman Danang Beach Resort, The Ocean Villas and Vinpearl Resort & Spa Da Nang are already full.
In Sa Pa, a popular resort town in Lao Cai Province, only mid-range hotels, motels and homestay have empty rooms now with prices ranging from VND400,000-1 million.
In Da Lat, several resorts on the outskirts of the town and along Tuyen Lam Lake, including the Terracotta Hotel and resort Da Lat are already 90 percent full.
In this area, visitors can choose from 2-3 star hotels and homestays like Gold View Hotel Da Lat, The Circle Vietnam Homestay, Homestay Vuon Tung and Moon Valley Dalat Hotel for VND500,000 to 1.5 million a night.
Currently, there are no travel restrictions for domestic tourism and the number of domestic tourist arrivals has been rising after the pandemic situation eased, said Nguyen Trung Khanh, head of the Vietnam National Administration of Tourism.
The number of domestic tourists in February rose by 380 percent year-on-year to 9.6 million, according to the Ministry of Culture, Sports and Tourism.
The frequency of domestic searches for flights and accommodation facilities have increased by 424 percent year-on-year since early February, according to data from Google's Destination Insights.
You must log in or register to reply here.
Share:
Facebook Twitter Reddit Pinterest Tumblr WhatsApp Email Link
Top Bottom